For people who love animals...what you might not know...

Some things most people don't know...

The large animal organizations that ask you to donate don't need your money. And they kill animals they don't deem worthy.
HSUS (Humane Society USA) PETA, and ASPCA (American Society for the Prevention of Cruelty to Animals) have MILLIONS of dollars. All three don't think feral cats are worth saving and recommend killing them. All three are against pitbulls and feral cats and don't find them worth saving.
HSUS gives less than 1% of the money to local rescues and shelters. And they don't take in animals themselves at their corporate offices.
PETA believes in getting animals out of bad situations...and then killing them. They hate pitbulls, feral cats, and their goal is to one day ensure that people cannot own pets. Even responsible owners.
ASPCA has physical shelters, but they kill animals they deem unworthy of life. That kitten they don't have time to bottle feed? A rescue wants to take him, nurse him back to health, then adopt him out. The ASPCA would rather kill him.
Please donate to LOCAL rescues. If you donate to a local shelter please make sure they are NO Kill. Ask them if they adopt out FIV positive cats, dogs with Diabetes...

...and that money goes straight to their CEOS for homes, cars, suits, and then the rest goes into advertising their agenda in the media and furthering their agenda. Do they help bust puppy mills? Yes. Then they dump them on local rescues and shelters without a dime. So you see, they collect money for the cause...and let the actual shelters do the work. But that sad eyed animal you see in the commercials- if he is shy, sick with a manageable disease, has separation anxiety, etc. etc. they will deem him not worthy and kill him. After they "save" him.

Officials from our organization have examined some of these dogs and, generally speaking, they are some of the most aggressively trained pit bulls in the country," Wayne Pacelle, the president and chief executive of the Humane Society of the United States, said in a telephone interview Tuesday. "Hundreds of thousands of less-violent pit bulls, who are better candidates to be rehabilitated, are being put down. The fate of these dogs will be up to the government, but we have recommended to them, and believe, they will be eventually put down."

Pacelle said the Humane Society normally advocated that fighting dogs be put down shortly after being seized.

"Four months is a long time, a long time to be warehoused," he said. "They may be walked only once a day, if that. We don't know how well they are being kept. They are likely being held in cages for months on end."

But Pacelle said his organization supported the government's efforts. "It is lose-lose for the dogs," he said. "They either die a gruesome death as a dogfighter in action, or they will be killed because they are not adoptable."

But as we know, those dogs were saved and rehabbed by Best Friends. Some of the dogs are now therapy dogs. Then HSUS asked for money on their site and in internet ads to "save these dogs". But that's okay- the next time there were pitbulls confiscated INCLUDING puppies that had never been used for fighting...HSUS recommended they all be killed even though several rescues offered to take these dogs and rehab them.  The case went to court and HSUS testified that they should all die- yes, even the puppies...And after this mess, they tried to get people to donate money to them for the care of one of the pits- Fay...
Here is that story- excerpt from Nathan Winograd via Nathanwinograd.com..."In 2009, HSUS set a goal of raising one million dollars in one month on the back of an abused dog rescued in the largest bust of a dog fighting ring in U.S. history. According to the HSUS fundraiser, ‘Faye’ was now safe, in a loving home, recovering thanks to HSUS. But none of it was true: HSUS was not involved in caring for Fay. HSUS, in fact, suggested that Fay should be killed. In further fact, they could not even get her name right. And while Fay was being cared for, and needed surgery, the costs and care were being provided by a small rescue group."

Here is their scam ad for the Vick dogs... 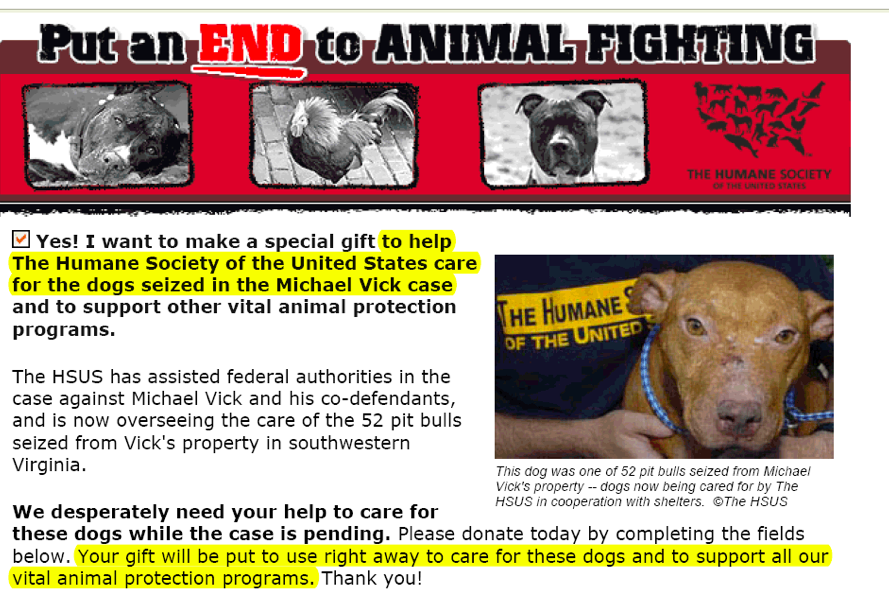 Read also an expose on Wayne Pacelle- multi-million dollar CEO of H$U$. Details of the times he has promoted killing of animals- http://www.nathanwinograd.com/?p=6510

I have been rescuing animals for as long as I can remember, and doing it actively with local NO KILL rescues for the past 5+ years. Ask any No Kill shelter, and they will tell you that it is WRONG to euthanize any animal that a (reputable) rescue, sanctuary, or shelter is willing to take and rehabilitate. What kind of "shelter" sentences an animal to death when it doesn't have to? That is why I am always sickened by people who will fight to the death to argue why these organizations aren't bad or why death is needed. There is no excuse for Oreo to be killed when there were local rescues willing to work with him. There is no excuse for that baby kitten to be put down in the back room when there were rescues willing to let him live. Don't be brain-washed by the sad ads and the million dollar campaigns. Every time I inform someone about this and they tell me they are canceling their support of these already rich organizations and giving to the small local ones, it's a step in the right direction. There will always be people who refuse to listen and will defend all of the killing. Anyone who supports turning away healthy animals and refusing to let shelters and rescues take said animals, is not truly an animal lover, but a sick, sick person.
To those people; every time you post your angry explicit replies attacking No Kill, you will be blocked no matter which e-mail or account you use. Continue to harass me and you will be reported. This is MY blog, not yours. i don't show up on your blogs screaming at you for your beliefs. Stay off mine.
Tags: aspca kills, aspca scam, hsus loves micheal vick, hsus scam, peta kills, peta kills animals
Subscribe